As I mentioned last week I’ve declared war on all the junk piles and overstuffed drawers in my home and I’m tackling one room per week to try to get things organized and Spring cleaned.  This past week I completed the master bedroom.

As you can see, I love to cross things off of lists and I am excited that I crossed everything off for this room.  Here’s some before and after shots:

I donated two boxes and two bags full of clothes.  Getting rid of a lot of extraneous hangers freed up even more space.  I kept 10 empty hangers for future purchases and relocated some to our boys’ closets and coat closet.

This closet had doors when we moved in but they were heavy, bulky sliding doors.  We removed them because they were very cumbersome to deal with.  We added the curtains to cover the clutter.  Initially I had used a different curtain rod but it was bending so I replaced it.  I replaced it but never got around to patching and touching up the paint where the holes were so I finally did just that.

Ugly, I know.  Sometimes I just get DIY burnout and let things sit for forever.  But no more.

Yes, I missed a little bit but in my defense it was cloudy and I had the light off.  I did go back over the missed areas.  Out of sheer laziness I did not take an updated photo.

As for the drawers in our mule chest and nightstand I cleaned those out as well.  I like to use the take everything out and then sift through method.

I got rid of a lot of socks, basically anything that didn’t have a mate or had holes in it.  And yes, that organizing grid was in there in the before picture, it was just covered by all the mateless socks floating around on top.

My drawer full of workout clothes was a wreck too.  I didn’t get rid of much from this drawer I basically just put everything back to order.  One of the best things I learned years ago was how awesome it is to “file” your t-shirts vertically instead of just stacking them.  This helps you to see what you want without riffling through the entire pile.

To file t-shirts simply fold them as you normally would then fold them in half.  Stack them up into a pile, then place them into the drawer vertically.

Due to my drawer’s depth pants don’t work quite as well but I don’t have quite as many workout pants and shorts so it’s not an issue to stack them in the more traditional way.

In my mule chest cupboard I mostly reorganized things but I did get rid of a few shirts that I had held on to for far too long.  Initially it’s hard for me to let go of things but you know it’s been a few days and I can’t say I really remember most of what I got rid of.  That tells me that I got rid of things I really didn’t use or need.  And that I should have done this ages ago.

I also emptied out and reorganized my nightstand.  It’s still pretty full, but I like having my books close for reading before bed.

As for the wall above the bed it’s 90% done.  I know initially I planned to use my Love Never Fails print but then I found that frame on the left and really loved it and wanted to use it instead.  I have ordered a picture from our wedding to go in that frame so just pretend that it’s there already.  I’ll find another home for the Love Never Fails print somewhere else in our house.  Try to ignore the ugly ceiling fan.  One day in the distant future it will be replaced or well, at least we will replace those shades.

Overall  I’m well pleased with the progress.  I know it’s not a dramatic make-over or anything like that, but functionally it’s a vast improvement.

Try to ignore the two piles of stuff out in the hall.  Those were a few items to be put away in my son’s room once he got up from his nap.  And a random sippy cup.

I also accomplished all the spring cleaning items in this room (dusting, washing, etc).  I hate washing mini blinds.  Am I alone in this?  I think it’s one of my least favorite chores ever.  Anyone else up to spring cleaning and organizing lately?  I feel like I’m a little late to the game but I’m glad that I’ve started.  Now that I’ve completed the master bedroom I am moving on to the nursery this week.  I should probably stop calling it a nursery now that he’s over a year and a half, shouldn’t I? 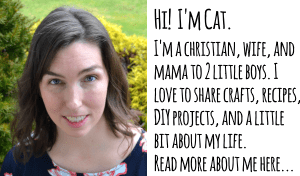 Posts on this blog may contain affiliate links. Please see my disclosure and privacy page for full details.