I had cinnamon rolls and orange soda for dinner last night.  Not the healthiest dinner, I know.  But at the time I was really stressed and it was purely a case of me eating my emotions.  I know that to turn to food for comfort is bad, but yesterday had some stressful moments.

While I taught Sunday school yesterday morning my husband watched our 18 month old son in the toddler room.  When I got done with my class I met up with him to take over so that he could go with our older son into church.  He told me that our son had been acting very agitated, was crying very easily and just seemed overall miserable.  I attempted to console him a little but it just wasn’t working and he felt feverish so we decided to head home.

We grabbed a quick lunch on the way home.  Then we took his temperature and it was 103 so we gave him some acetaminophen and put him down for a nap.  After his nap it was still 103 but I wanted to wait and see if it would come down a little.  We waited an hour longer but his temperature got higher.  We had been wavering on whether to take him in but at this point we decided to have him seen since it just wasn’t going down.

So we dropped our older son, A off at his grandparents and took baby S to the local Children’s ER.  On arrival they took his temperature and it was 104.  We were there for several hours during which they were able to get the temperature to come down to 101.  I was thankful that he was doing much better.  When the fever was super high he was just laying on our shoulders, occasionally whimpering but as his temperature lowered he got a little more active and eventually wanted to get down from our laps and explore the exam room. 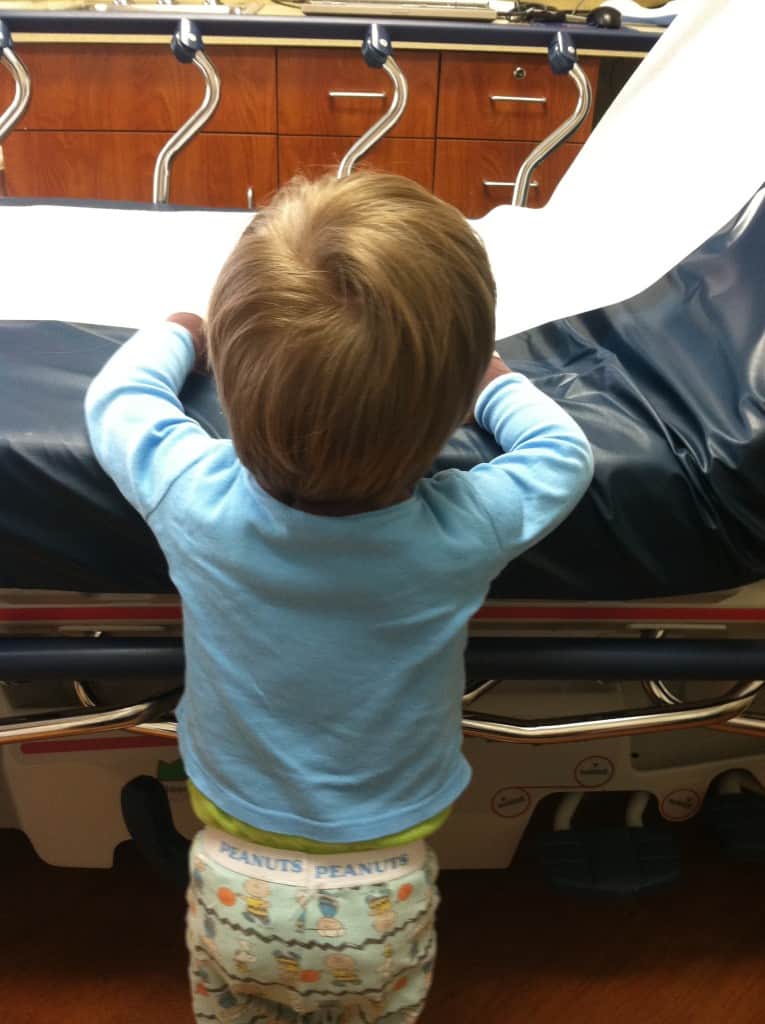 The doctor did a throat swab to check for strep because his throat was really red and they ran some other cultures but so far all have been negative.  He told us it must just be a virus and will have to run its course and sent us home for the night.

We left the ER and stopped at the grocery store to pick him up a few sick toddler necessities (yogurts, applesauce, juices, jellos).  And while I was there I grabbed cinnamon rolls.  Things were better at this point but I was emotionally beat and when I saw them I gave in to the stress and emotion of it all and got them.  And an orange soda.

Today is a new day.  Thankfully S slept well last night and he has not had a fever at all today.  He’s still behaving a little sickly (there’s a runny nose now and he’s grumpy) but overall he’s doing much better.

And I may have made some crappy food choices last night, but today is a new day for me too.  I’m not making any excuses for my dinner choice last night or for seeking comfort from food, but I’m not going to beat myself up either.

I am going to make bad food choices from time to time but this is a long journey I’m on and overall I’m making more good choices than bad ones.  I’ve learned more than anything the past few years the importance of showing grace- toward others and toward myself.

And so today I’m weighing in a little higher than last week, but it’s OK because overall I am seeing progress in my journey toward a healthy lifestyle- imperfect progress, but progress none the less.

Here’s how things are looking today:

This week I gained 0.8 pounds.  Since beginning my Healthy Mama Challenge 23 weeks ago I have lost 9.4 pounds or 5.4% overall.

I have a few weight loss goals-

This week I kept up with my training for the Flap Jack & Jill 5K and even had my first run outside!  I’m looking forward to getting out and running this afternoon as it’s going to be a balmy 45!