After talking through my surgery last week a friend sent me some verses including this one: 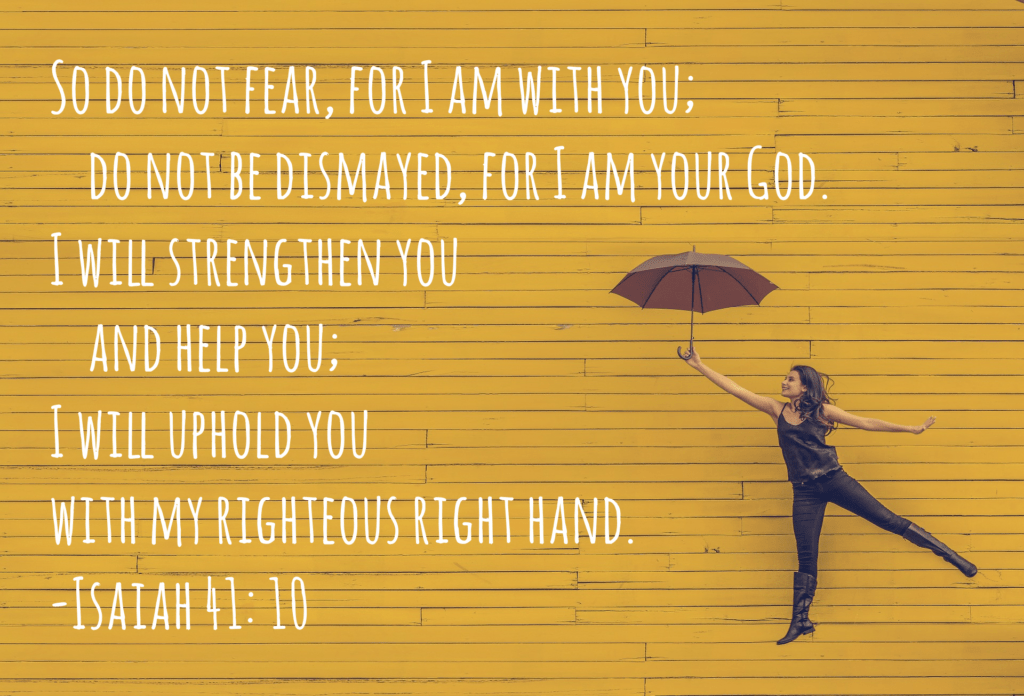 It’s a perennial favorite and we even have a print of it hanging in our older son’s room.  I read it to him whenever he has a bad dream.  And even though familiar and oft-quoted I find it to be one of the most comforting verses of.  Perhaps the familiarity of it contributes to the comfort factor?

The surgery went ok.  Things could always be much worse and so I don’t want to whine… but when they went in to see if things were healing they found that my last surgery failed.

Let me back up and explain.  I haven’t told the whole story on the blog before so I will try to be brief.  When I was 13 I skipped breakfast one morning.  I had a busy morning, including singing in the school choir and on the way back to class from the assembly I passed out.  I fell forward, hitting my front two teeth on the floor.

The nerves in those teeth were damaged and so I had root canals and crowns put on.  About 12 years later some x-rays showed that cysts had grown in the areas where the roots had been and were continuing to grow.  So they had to remove my front two teeth completely in order to get the cysts out.

So then I had to have a bone graft done in order to replace bone loss in that area and have dental implants placed.  Right after they were done things looked good and it looked like the end of my not-so-fun journey.  But it wasn’t.

Two years after they were done I was pregnant.  And one of my wisdom teeth decided to fail.  I had to have it removed and while visiting the oral surgeon he mentioned that I should have someone look at my implants because the x-rays made it look like I had some bone loss in that area and that the implants had failed.  Since having the dental implants placed I had moved states and so I had to find a new implant specialist.

In the meantime I asked my regular dentist if she thought I needed to see someone and she said the x-rays looked fine.  I trusted her for that time and anyways I was pregnant so I couldn’t really do anything at that time.

I tried to shake lingering worries about the area but I couldn’t.  They were looking worse and worse.  You could see the metal of the implants peeking out from above the crowns and you shouldn’t be able to.  After my second pregnancy I went to see a specialist.

And he confirmed my fears.  Based on all the past x-rays I had gathered they were able to see that my implants had failed early on.  They had to be removed and we did the process all over again but using a different kind of bone graft and implants, hoping to get better results.  To be cautious they did the done graft and waited a year for the bone to fuse and harden.  It looked great after the year so they placed the posts for the implants.  They waited 6 months before wanting to actually load them with the weight of the crowns.

At my 6 month appointment (one year ago) the x-rays showed that some of my bone disappeared.  So much so that they couldn’t move forward.  The posts would have to be removed and we would have to try something different.  But first they had me go through a whole bunch of blood tests and a bone density scan, to rule out issues with my bone metabolism or even osteoporosis.

The tests all came back ok.  So we then proceeded with another procedure.  They removed the posts.  Then they took some bone from the back of my jaw and grafted it to the area above where my front two teeth should have been.  The hope was that my body might not reject the bone if it was mine rather than the artificial stuff and that it wouldn’t disappear like last time.

The surgery appeared to go well at the time (February of this year) but at the check ups each couple of weeks it just wasn’t closing up and healing right like it should.  Two weeks ago at the 6 month check they told me that they needed to open up the area, see what was going on, take out the screws, clean it up, and hopefully be able to close it up better.

That was on Friday.  The surgery went ok, thankfully. But when they opened it up they saw that the bone from my jaw was loose.  It had not fused properly.  It came out with the screws.  I didn’t know any of this until Friday evening when they called to let me know.

My surgeon delivered the news that it didn’t seem like implants will work for me.  At this point we are going to wait a year and let everything up there heal.  They did some bone grafting to fill the space in my ridge but it will never hold weight.  After a year of healing my dentist will install a bridge and crown system.  Basically I would have two fake teeth for my front two teeth which would attach to the adjacent teeth that would have to have crowns placed over them.  It’s not as long-lasting an option as implants are but on average they last 5-10 years.  They’re more complicated to clean but I have good oral hygiene and I know I will take good care of them, hopefully making them last even longer.

It’s not what I wanted but I’m honestly at peace about it.  In about a year things should be resolved.  And I won’t have to have a surgery for the bridge procedures.  And then I hope not to think about it all the time.

Aside from the medical concerns, I’m vain.  My teeth are so front and center and for a while I have had to have a partial denture (retainer) with two little front teeth to fill the gap.  They have to leave a gap between the denture teeth and the area so that it wouldn’t interfere with the implant process so I’ve had this hideous gap for so long.  I’ve felt so self conscious about smiling for over a year now and it makes me sad.  After about 2 months of healing from this last surgery the swelling should be down enough that I can have a new one made that will not have the gap and will look so much better.

So it’s not all done and not turning out the way I’d hoped but I’m ready to move forward and stop dwelling on all this journey behind me.

Instead I want to focus on these truths-

God is with me.

God is my God.

God will strengthen me.

God will help me.

God will uphold me with his righteous right hand.