“Jesus had compassion on them…”

In studying the book of Matthew with Good Morning Girls we’ve read that phrase more than a few times.  Repetition is an effective literary device.  It causes us to stand up and take notice of something.  It demands that we see certain words more than others.

Clearly God wants us to notice that Jesus had compassion.  And as the Bible calls us to follow him and be like him then logically we are called to be compassionate as well.  But what does that really mean?

According to the International Bible Encyclopedia there are a few words in the Bible which are translated to compassion and while there are some differences in how they literally translate the overall idea remains the same and I think is summed up well in Webster’s Dictionary’s definition:

compassion- (n.) Literally, suffering with another; a sensation of sorrow excited by the distress or misfortunes of another; pity; commiseration.

I would argue that one of the most important aspects of Jesus’ compassion though is that his compassion led him to action.

When he saw the crowds, he had compassion on them, because they were harassed and helpless, like sheep without a shepherd. Then he said to his disciples, “The harvest is plentiful but the workers are few. (Matthew 9:36-37)

When Jesus landed and saw a large crowd, he had compassion on them and healed their sick. (Matthew 14:14)

Jesus had compassion on them and touched their eyes. Immediately they received their sight and followed him. (Matthew 20:34)

And there’s the rub.  At least for me.

You see, I have no trouble feeling the feelings.  I feel bad for those suffering, for those in need, for those who are sick.  Where I most often fail though is that my compassion doesn’t go anywhere.  I don’t do anything about it.

I’m busy, I’m tired, I’m scared, etc.  I’ve got a lot of excuses.  Many times I let those excuses talk me out of doing something for someone else.

But God has been working in my heart to change this about myself.  The words compassion and mercy have been ringing in my ears lately and I’ve been feeling God freeing me from the paralysis that I have so often felt in the past.  He’s been calling me to give, give, give of myself and the more I do it, the more I feel it coming naturally and the less I feel afraid. 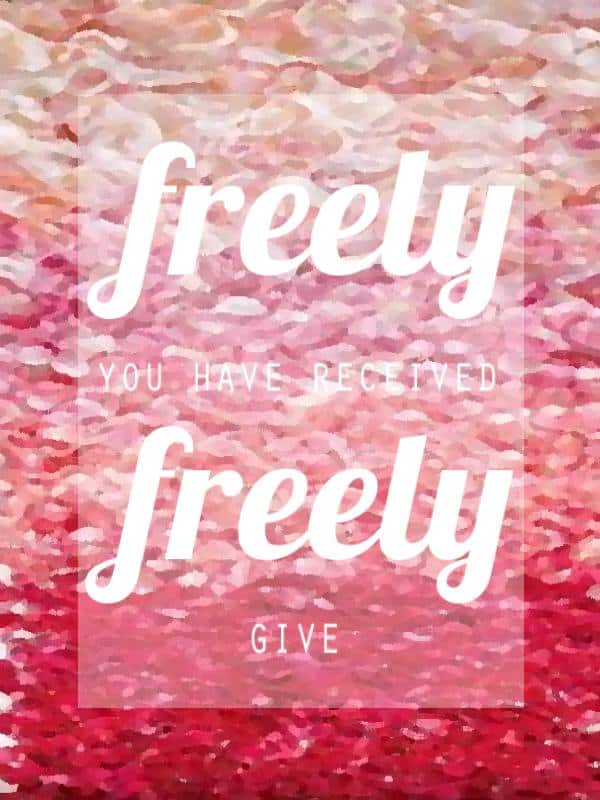 You see, I’ve learned over the past couple of years that fear has kept me from doing a lot of things and from being the person I want to be- the person who God made me to be.

Moving forward I am working at being brave, at listening to God and not my fears, at moving on feelings of compassion, on giving freely and loving freely.

Is there something that your fears have kept you from doing or being?

beautiful! I'm convicted to have more compassion for others. To actually MOVE for Him..His glory.