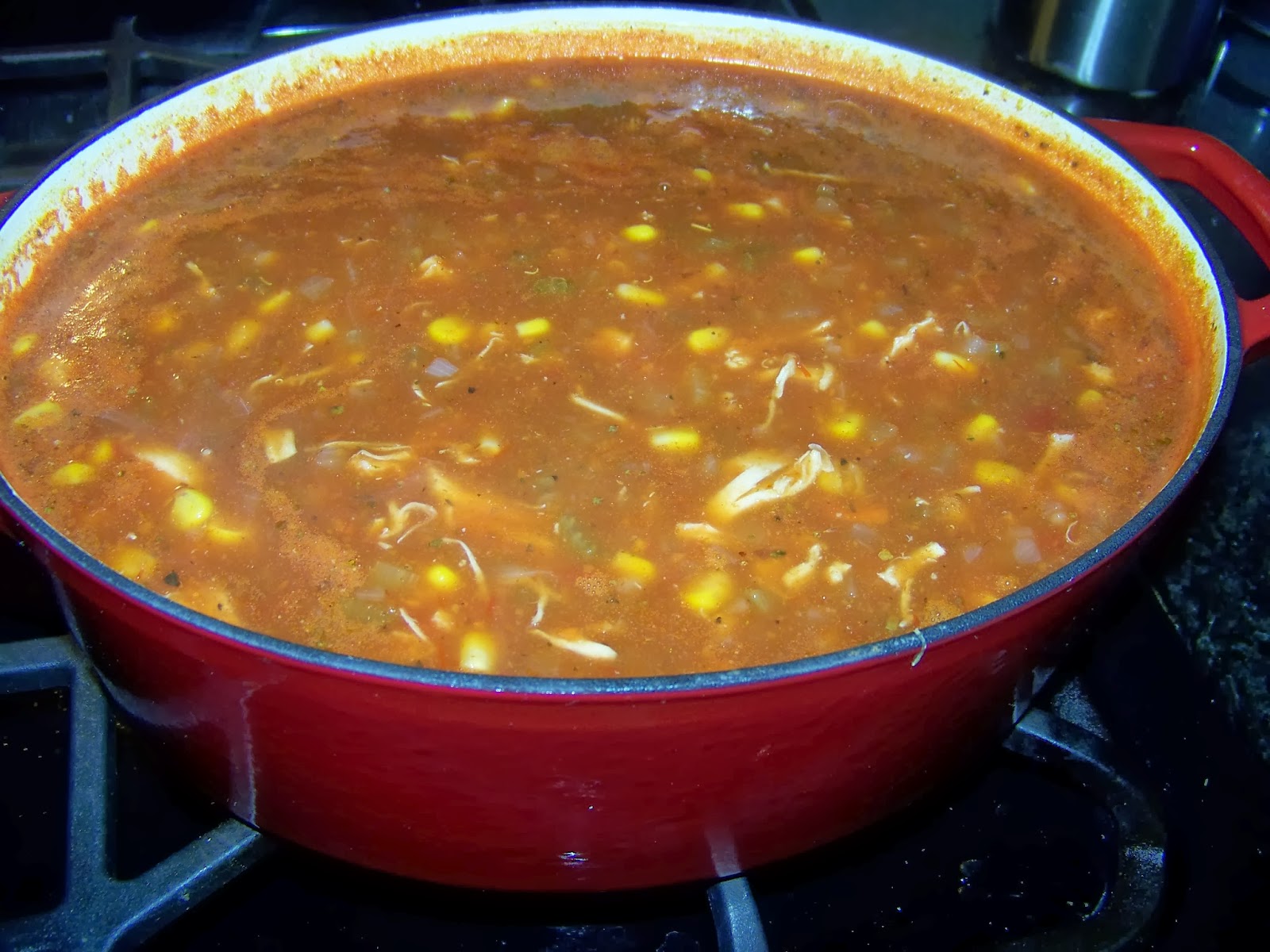 This soup has absolutely nothing to do with the Super Bowl other than the fact that I made it just before the Super Bowl came on.  Really, I was making it while my husband and son were watching the Puppy Bowl, but the name Puppy Bowl Soup just isn’t quite as appealing.  This recipe has its origins in this recipe from Southern Living.  My Papa makes that chicken vegetable stew every Christmas and it is well loved in my family.  Over time I have tweaked the recipe (taken out the lima beans and ham, added more corn) and yesterday I changed it up even more.  I have been focused on working out and eating healthier as a part of my goal to lose the weight since I had baby S about 5 months ago, so I wanted to see if I could pack even more veggies into this stew to maximize my veggie intake.  Here’s what I came up with:

Put your chicken broth in the dutch oven and bring it to a boil. 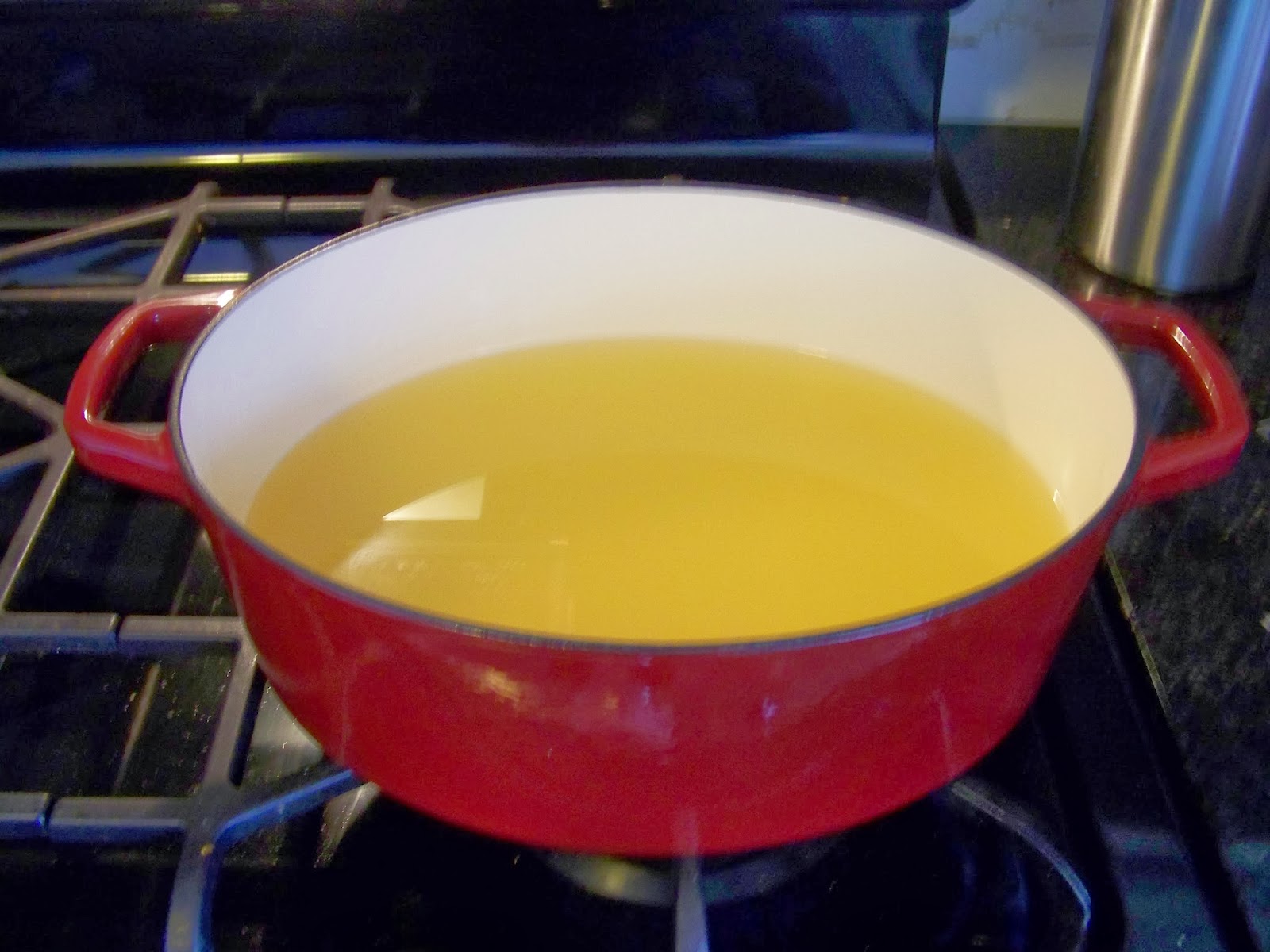 Once it is boiling, add in your chicken, onion, and celery.  Bring it back up to a boil, then reduce the heat and simmer for about half an hour.  Make sure that your chicken is nice and tender and always make sure it’s cooked to a safe temperature. 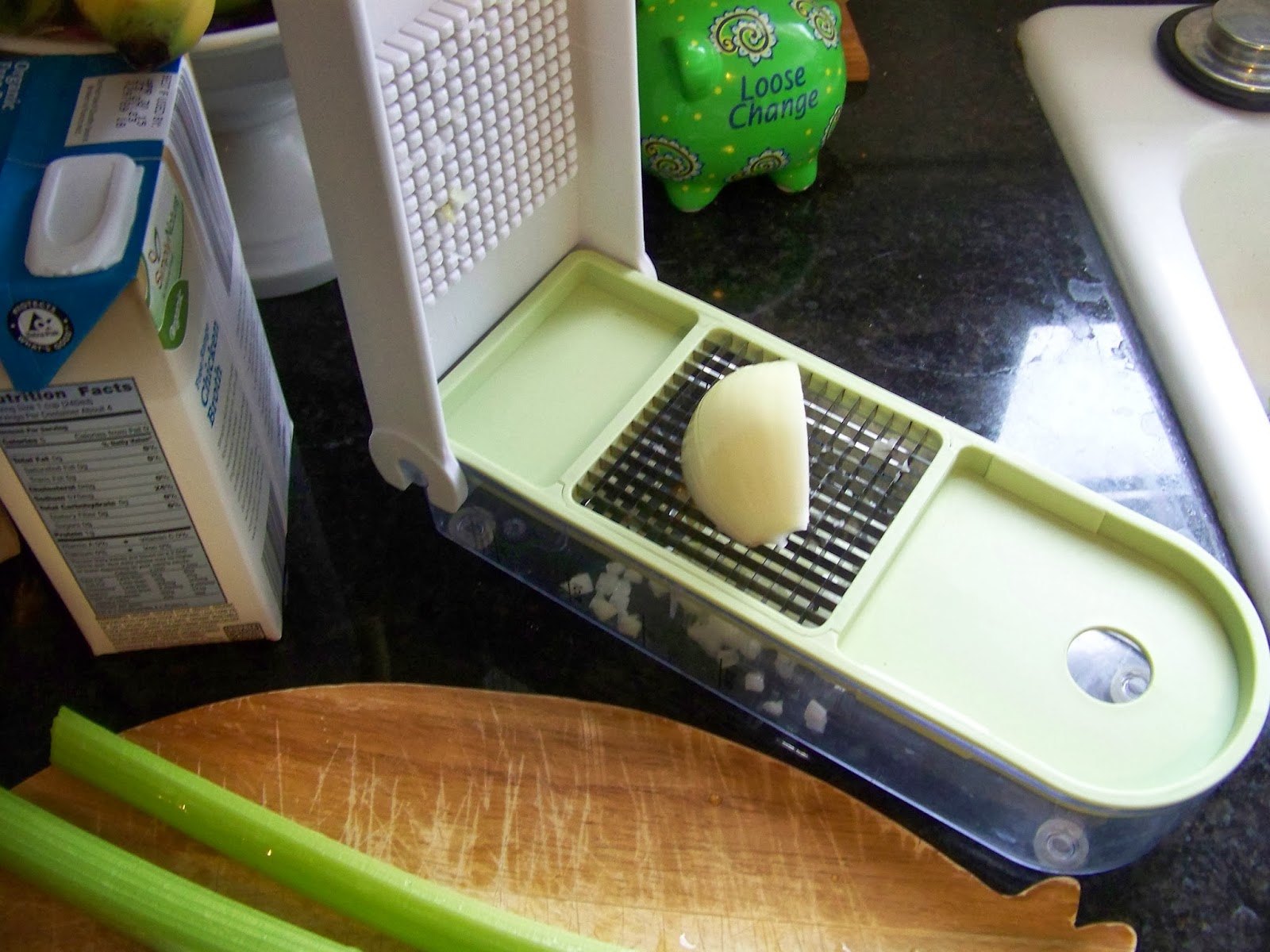 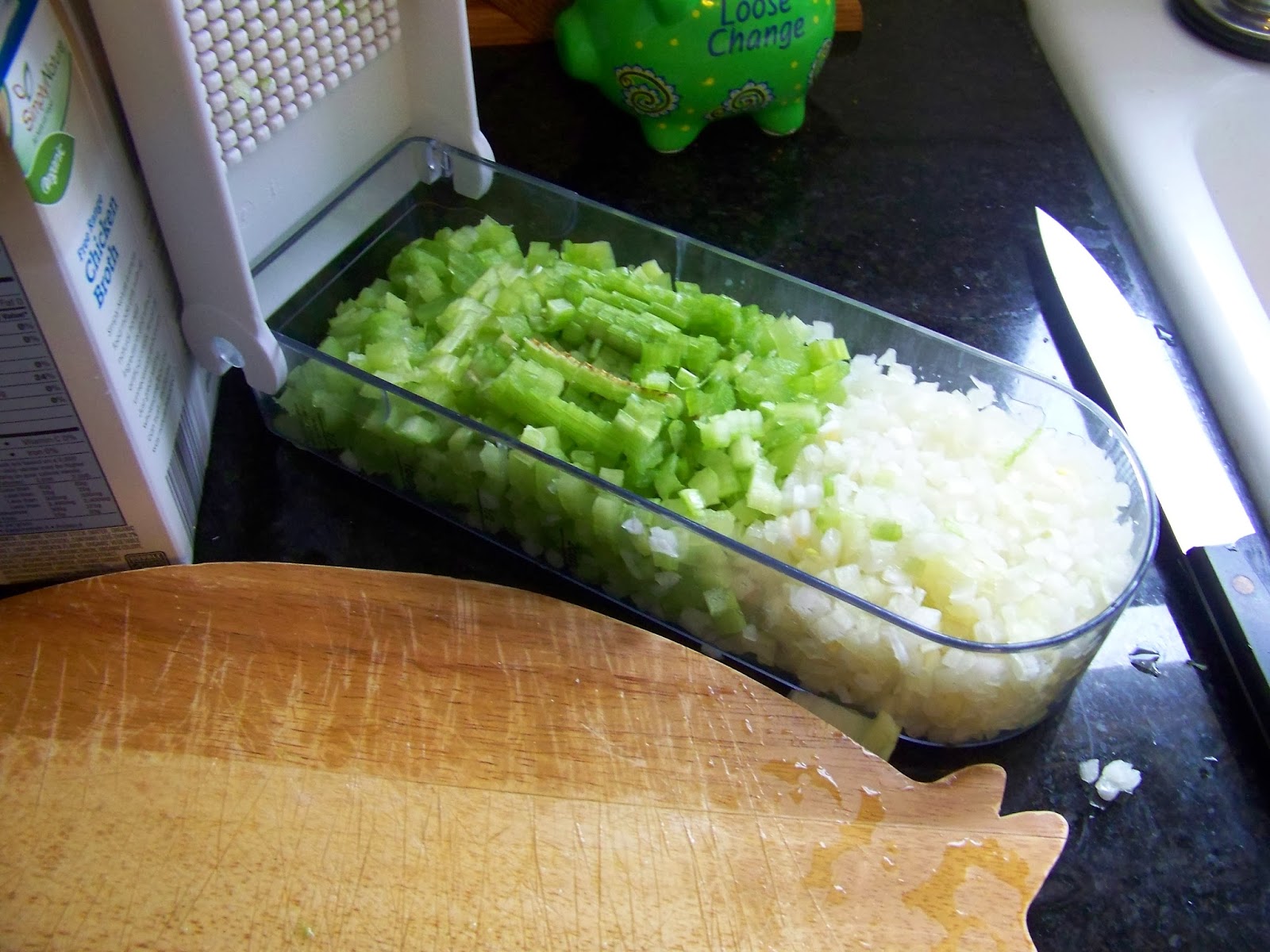 To speed the preparation up. I used my Vidalia Onion Chopper to quickly cut up the onion and celery.  I love that thing!

Take the chicken out of the dutch over and let it cool down some.  When it has cooled down enough, shred your chicken. 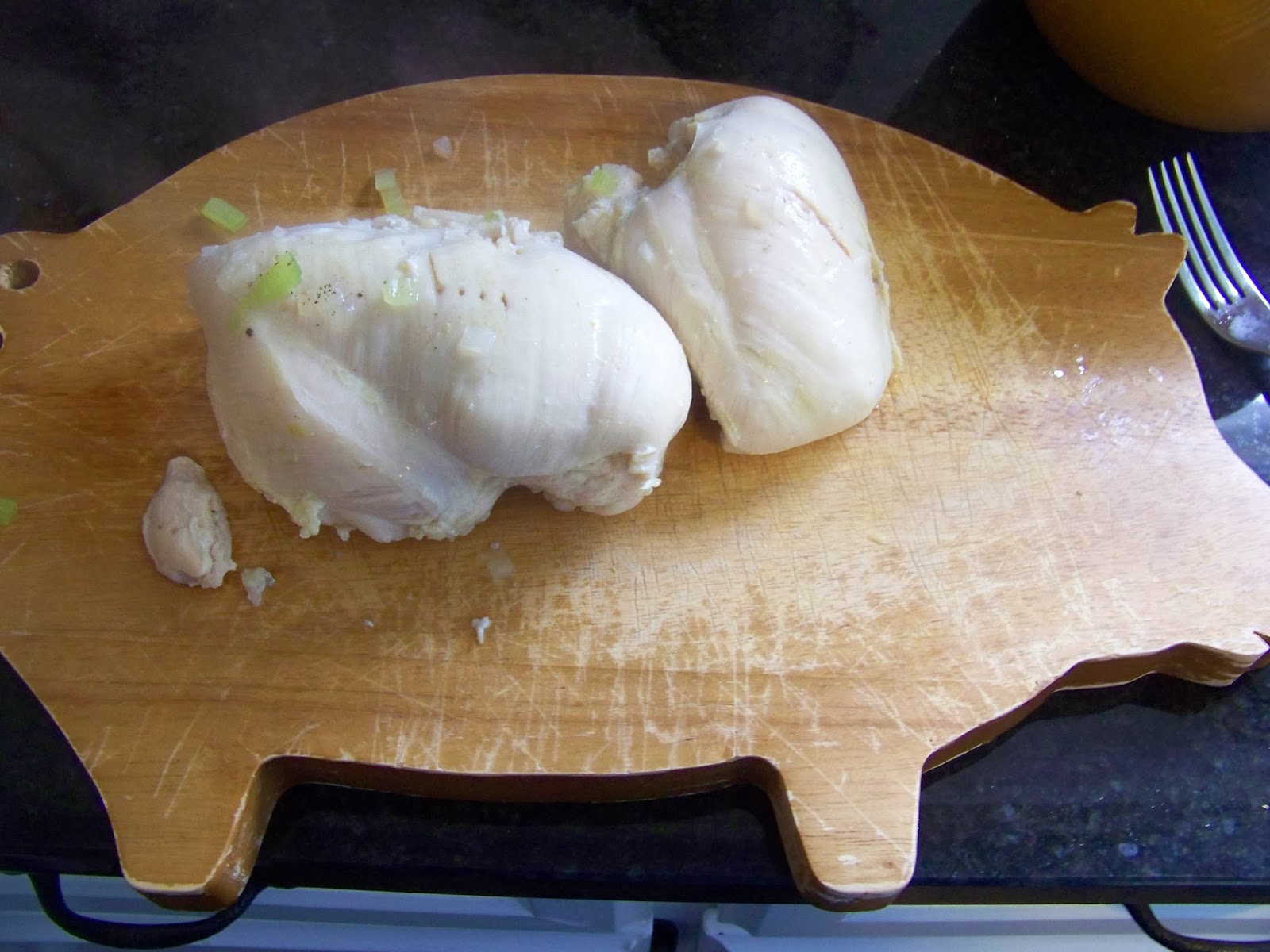 While the chicken is cooling, cut the carrots into big pieces.  Put about half an inch of water into a saucepan and bring it to a boil.  Then throw in the carrots and spinach and cover the saucepan.  Allow them to steam for about 5 minutes, or until the carrots are tender. 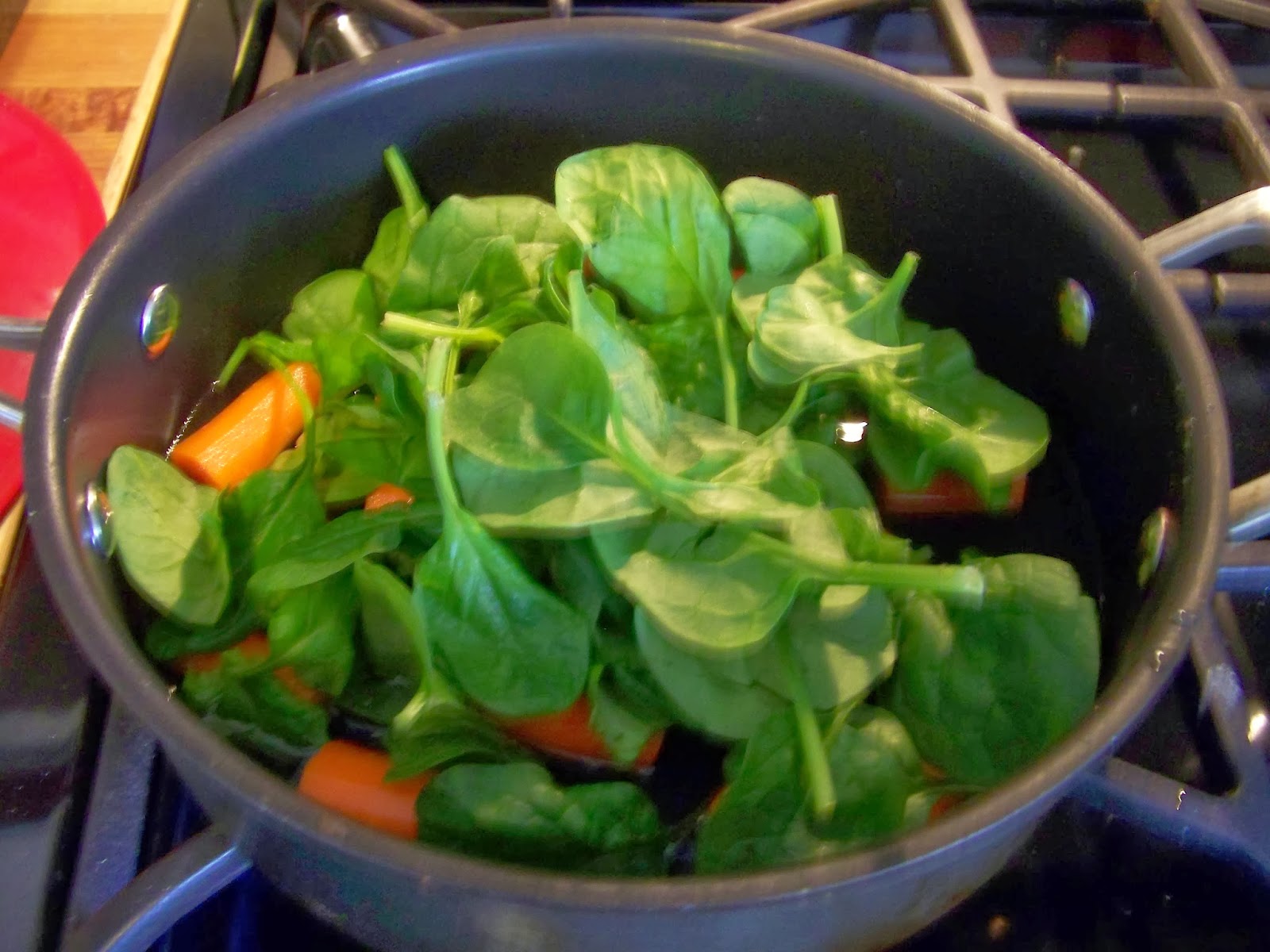 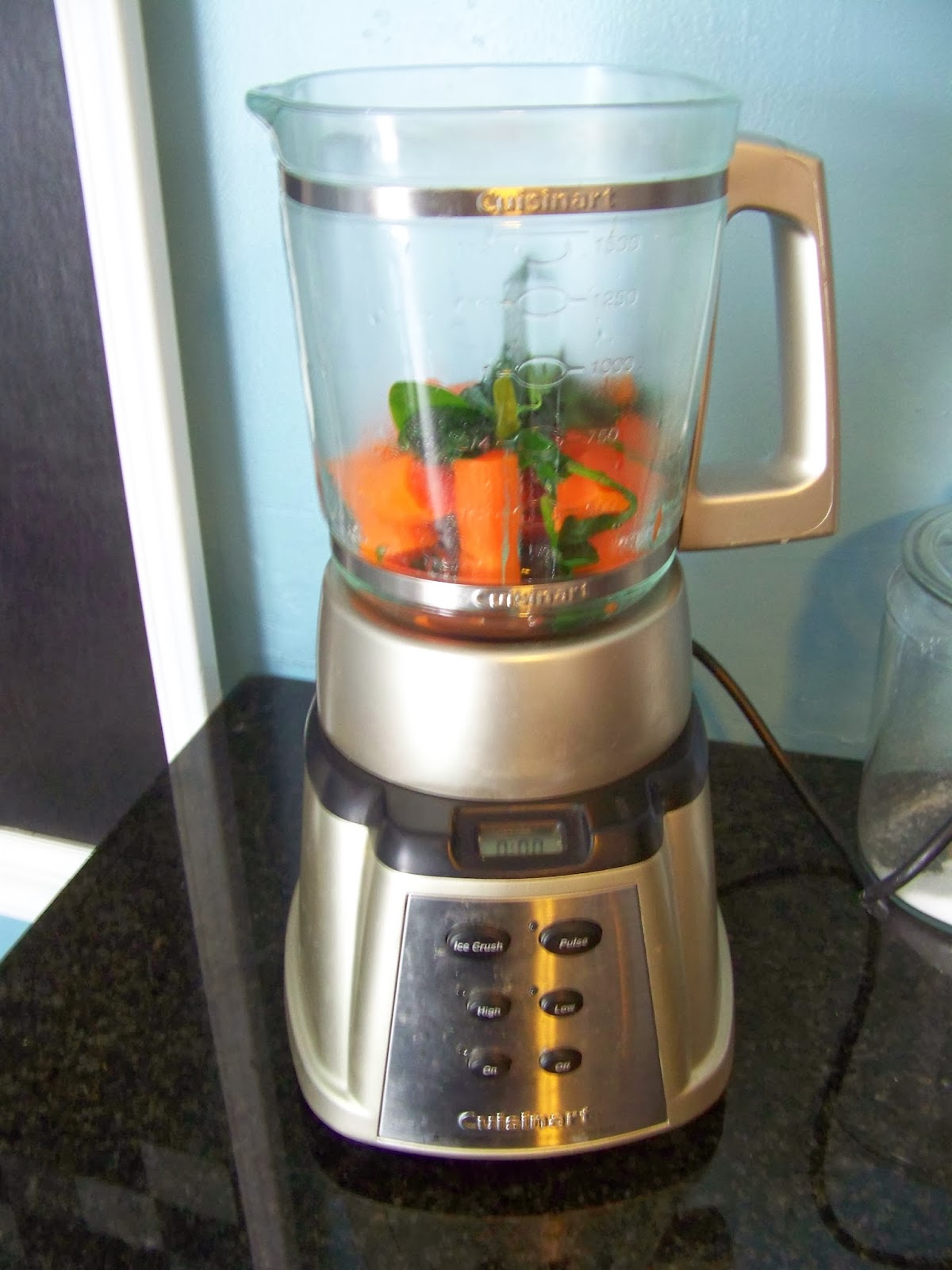 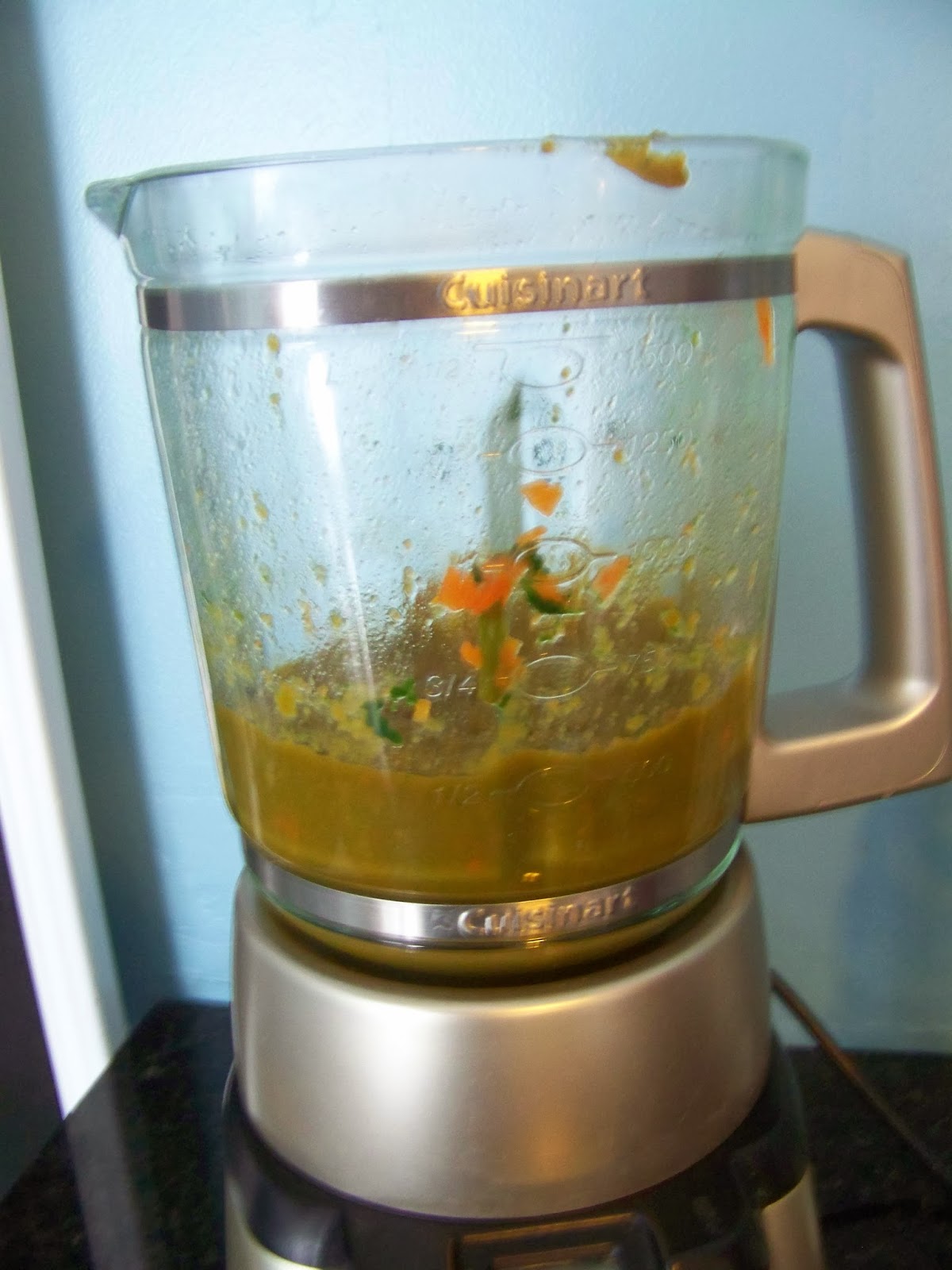 Now, this is not the prettiest looking concoction ever, but pureeing the spinach and carrots helps them to disappear into the soup, allowing you to sneak in even more veggies full of nutrients.  You won’t even taste them.  Which is fantastic for kids or for grown ups like me who don’t really love their veggies. 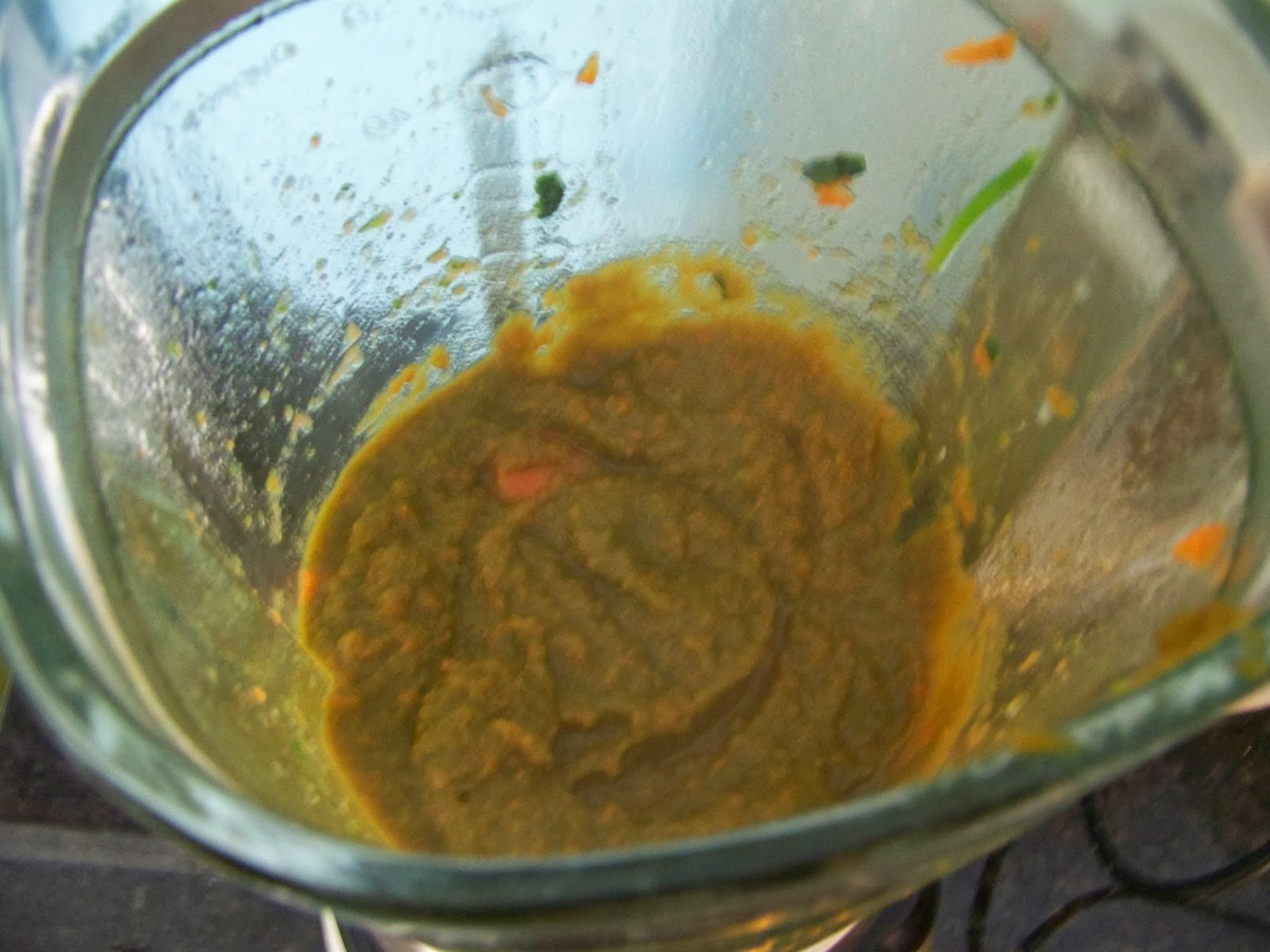 To finish the soup add the veggie puree, shredded chicken, and all the other remaining ingredients into the dutch oven with the broth.  Bring everything up to a boil, then lower the temperature back down and simmer for half an hour. 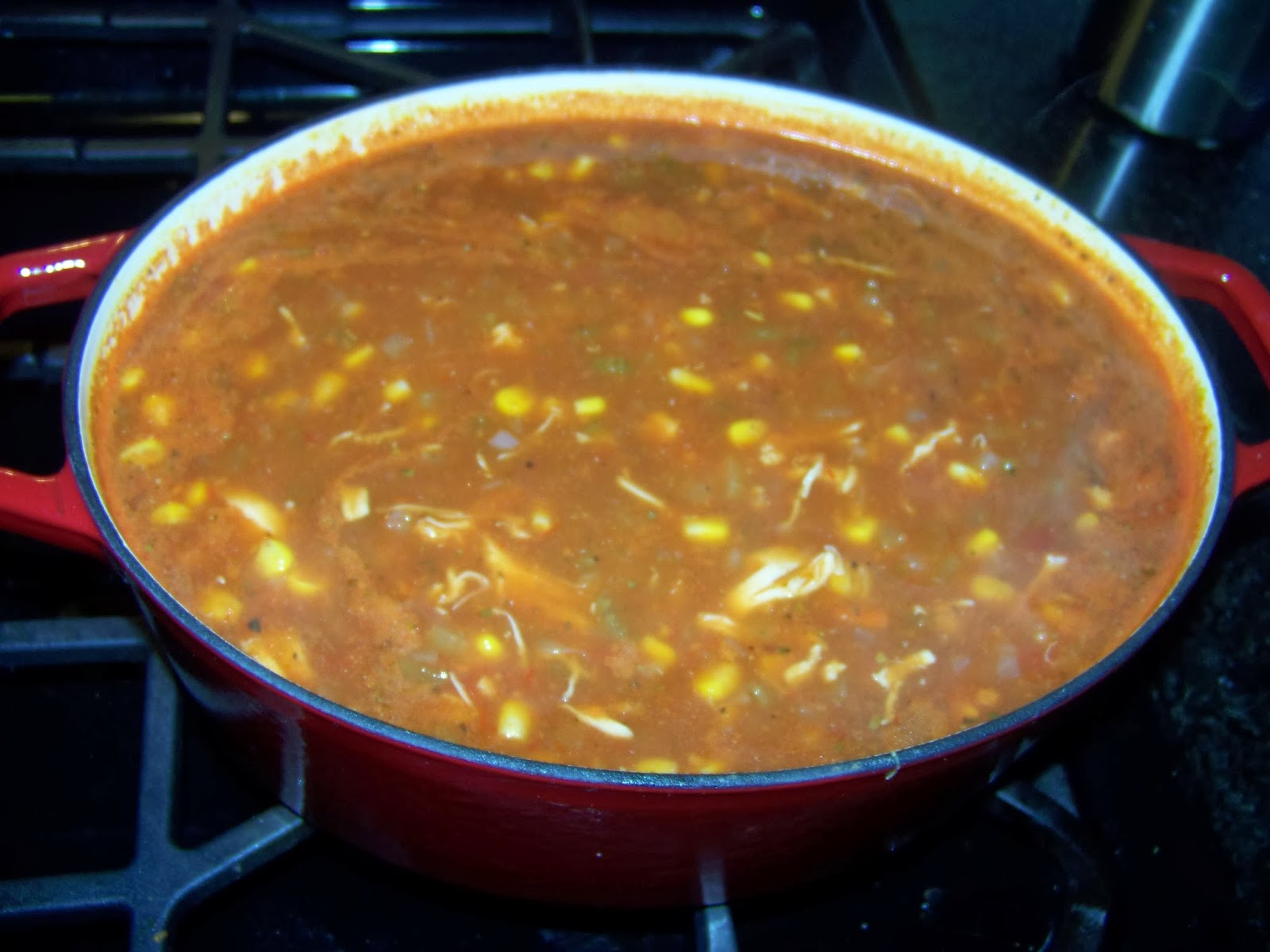 My husband and 3 year old son loved it!  Nutritionally, I would say it’s a hit.  I used SparkPeople’s Calorie Counter to help me calculate the calorie content for some of the items that I did not know.  Keep in mind that I’m no food chemist, but I this should give you an idea.

Generally speaking, we fill up our soup bowls when we have this as our meal and our bowls hold about 2 cups of soup, so for us it’s about 268 calories for a large bowl full.  Also, I made a huge portion of the soup.  Did you see how full my dutch oven was?  If you want to scale down the recipe so that it makes 8 cups of soup, then cut all the quantities on the ingredient list in half.

Give it a try and let me know how you like it!