It’s been 3 weeks now since our 3 year old son had his tonsils and adenoids removed and I wanted to share a little bit of our experience.  I know that going into this I wanted to read all I could about other kid’s experiences and I could not find a ton out there.

While every child will have a unique experience perhaps something I share about our experience might help you and your child.

So at age 2 we took our younger son and had a speech evaluation, x-ray, and a consultation with an ENT.  The speech results were normal but the SLP agreed that qualitatively there was something about his speech that merited a visit to the ENT.

The x-ray showed that his adenoid was moderately enlarged.  The ENT said that we might need to have it out but if it wasn’t affecting his speech then it wasn’t a problem at the time.  Well, a year later at our visit with our pediatrician I brought up the speech and adenoids again because his symptoms were becoming more pronounce.  His speech hadn’t cleared up on its own and he was drooling more and snoring more.

We consulted with a different ENT this time and we found that both his tonsils and his adenoids were very large.  They were obstructing his breathing and the ENT recommended removing both.  He explained that the adenoids and tonsils grow the most between ages 2 and 5 so it made sense that we had seen his symptoms worsen in the past year.

We scheduled our son’s surgery at the local children’s hospital.  (If you are local I cannot say enough good things about Akron Children’s Hospital!)  Our surgery was scheduled for 9:15 and we were told to arrive at 8:15.

Our son was allowed to have food up until the night before and water until 6:00 the morning of the surgery.  I woke him up at 5:55 so that he could have a few sips of water.  He didn’t like that he could not eat breakfast until after the surgery.  I also didn’t eat because I didn’t want to eat in front of him.

After getting our son up we dressed him in some clean pajamas.  Then we got our older son up and dressed for the day.  I dropped my older son off at my in-laws to eat breakfast.  They watched him before and after school that day while we were at the hospital and helping get our son settled.

We arrived at the hospital on time, checked in and were taken to a room.  For the hour before the surgery we were visited by various nurses verifying information, the anesthesiologist, and the child life specialist.  The child life specialist was amazing!  She showed him the mask he would wear for the anesthesia and how they would put it on him.  She also got a surgery hat for his doggie and a pretty sweet set of wheels. 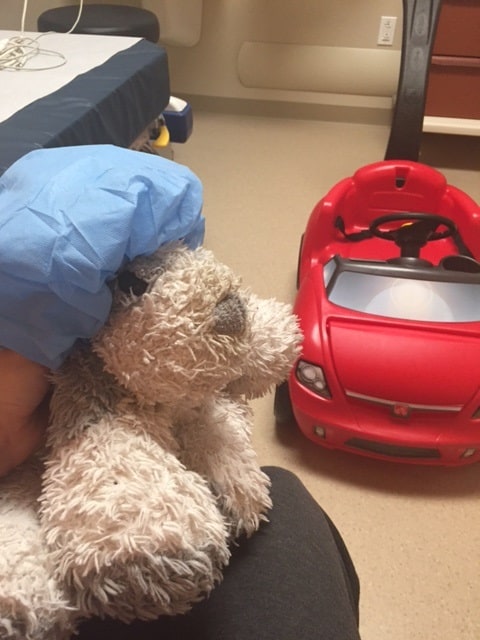 We spent about the last 10 minutes prior to surgery wheeling around in his car.  When it was time for him to go back into surgery the nurse wheeled him back in his little car.

The nurse at the information desk gave me a card with my son’s number on it so I could watch his progress.  His surgery lasted about 30 minutes and while I waited I texted my husband and grabbed a breakfast of a soda and a rice krispie treat.  I know, not great, but I didn’t want to leave the area.

After about 30 minutes the nurse took me to a small consult room.  A few minutes later the ENT came in and told me that everything had gone well.  About 5 minutes later I was taken back to my son’s recovery room.

He was rather upset.  I expected this because my older son had been upset when coming out of the anesthesia.  The nurses helped settle him in on me while I sat on a glider.  He was thrashing and crying and quite upset.  After about a half an hour he was not calming down so the nurse gave him some morphine.  It took about 20 minutes for it to kick in and then he finally rested against me and calmed down.

We hung out in his recovery room for about 2 hours.  Once he finally settled he watched a few Clifford episodes on the ipad.  He had a few sips of water and a popsicle.  Near the end of our time in the recovery room a nurse from the pharmacy took me over to a computer so that I could pay for his pain medicine to take home.

When it was time to go home one of our nurses pushed him out to our car in his little car.  I cannot say enough good things about how sweet and caring our nurses were.  We were cared for so well the entire time we were there.

The afternoon of the surgery he seemed mostly tired.  He had 6 popsicles and some jello that afternoon and evening.  Unfortunately his pain medications had to be taken every 4 hours so we had to wake him up during the night.  He was grumpy that night but he took the medicine.

Day 2 was rough.  Day 2 and 3 were the worst.  They say those days are the worst and I believe it.  He would not talk.  He just shook his head yes and no.  He didn’t want to drink either.  Getting him his medicine was very difficult.

Days 4-10 things slowly got better.  He started to eat and drink more.  If your child is having a tonsillectomy then be sure to stock up on a variety of popsicles and soft foods.  My son ate a lot of jello, applesauce, pasta, mashed potatoes, etc.

Also stock up on library books and DVDs.  And prepare yourself for your kid to be miserable, cranky, and a little irrational.

Has your kid had his or her tonsils out?  Be sure to leave your best tips for other parents who might be getting ready to go through it with their children.