I want to share this experience because when we walked through this with our son we did not know many people who had gone through it, and I could not find much to read on other children’s experiences on the internet.  My hope is that if you are a parent whose child has to have an adenoidectomy, then reading through our experience my help you in some small way.

Just short of a year ago our son had his adenoids removed.  For those of you who don’t know what they are, basically they are a mass of lymphatic tissue (just like your tonsils) located behind and above your uvula.  Adenoids need to be removed sometimes in conjunction with the tonsils, and sometimes on their own.  They are removed for a number of reasons.  Our son’s adenoids were so enlarged that his nasal passage was completely blocked.  He could not breath through his nose, had bed sleep apnea, and had a loss of hearing which was causing a slight speech delay.  I fully understand that there are many worse things that could happen to your child, but as soon as they told me that my son would have to have surgery I was crying.  Despite knowing that an adenoidectomy is a minor outpatient surgery I worried for him.  I knew that he needed to have it done and it would greatly improve his quality of life, but what if something went wrong?

Our son had just turned 2 and there is no way to explain to a 2 year old that he or she is going to have surgery.  We prayed about it all leading up to the surgery and knew that we had to trust God to take care of him.  The morning of the surgery we got him up a little early and loaded him into the car right away.  I was surprised that he didn’t ask for milk that morning.  Due to the anesthesia he could not have anything to eat or drink before the surgery and I was worried he would be upset when we refused him, but he never asked.  We were a little early so we had to wait.  Once he was checked in we were led back to the pre-op area where they put a bracelet on him and then went over a few details with us. 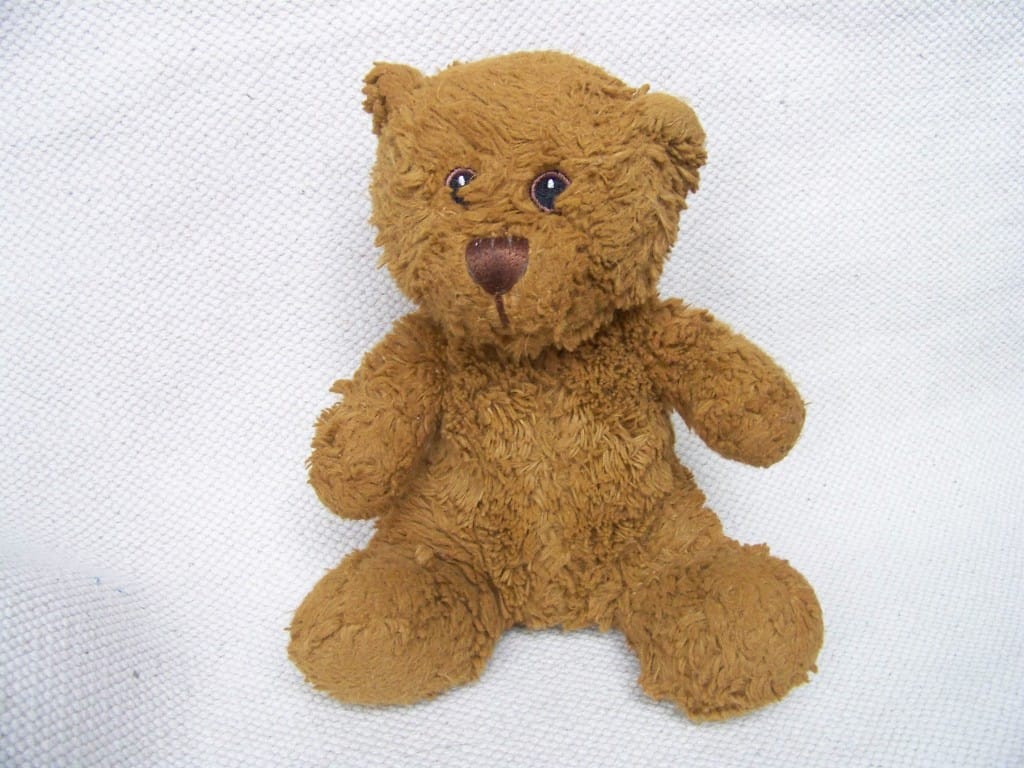 This little bear was waiting for my son in the pre-op area. He had a little surgical hair net/cap and hospital t-shirt, but those have long since been lost.

And then the dreaded moment came.  I had to hand him over to an anesthesiology nurse who took him back to the operating room.  Our son had only just met the nurse two minutes before and so he started to cry when I handed him over.  We then had to go back to the waiting room and wait.  I bolted into the ladies room because the sobs were coming and I didn’t want to disturb the other people waiting for their procedures.  I knew that it was a short procedure, so I quickly calmed myself down, cleaned my face and went back out into the waiting area.  The surgeon came out after 12 minutes (the longest 12 minutes of my life) and told us that everything had gone well and that we could go in a few minutes later once our son had become a little more alert.

As soon as they let us into the anesthesia recovery area I could hear our son screaming.  Apparently there is a neurological phenomenon that causes you to come out of anesthesia the way you came in.  So if you were crying when they put you under, you come out crying when you wake up.  I ran to him as fast as I could and crawled into his bed so that I could cuddle him in my lap.  He was basically inconsolable.  He sobbed and sobbed for a long time.  I had to work hard to keep him from pulling out his IV.  In order to be able to leave we had to get him to calm down enough so that he could drink or eat a Popsicle and keep it down for a little while.  After almost an hour we were finally able to calm him down by getting him to watch a video on my husband’s iPhone.

We finally left the hospital and went home.  He was quiet on the way home and a little groggy.  The rest of that day he was groggy.  They had told us that he would be groggy until the anesthesia wore off.  Later that evening he started to be less groggy and he pretty much was back to normal that evening.  He was actually running around and playing a little before bedtime.

That night we went in to check on him after he had gone to bed.  We were impressed by how soundly he was sleeping.  The next day it was as though nothing had happened.  Immediately his breathing improved, his sleep apnea was gone, he had full hearing, and his speech improved.  We are so thankful that his experience went well and feel so blessed.  We pray that if your child has to have his or her adenoids removed that your experience goes just as well.  Please feel free to ask any questions as I would love to be of some help!