If I had oodles of money, I’d spend a good amount of it at Pottery Barn.  But I don’t.  Don’t get me wrong, I’m not complaining- we are very blessed and have more than enough money, but we do live on a budget so that we can do important things like save and give, but there’s not a ton left over for fun decorative do-dads.  I was perusing the Pottery Barn kids website for Halloween costume inspiration and I came across these cute chair covers.

A, my older son wants to be a spider for Halloween, so I thought that these would be a fun way to decorate our table for this month.  They’re no longer on the website, but when they were they were $16 each.  Looking at them and knowing that they are made of felt, I thought for sure that I could make them myself and for less than $16.  Here’s my version:

My chair cover looks a little less polished and a little more floppy, but my son LOVES it!  He wants me to decorate all the chairs now, but I that’s not going to happen.  I however decided to make a pumpkin one for my little one, baby S.  They had a pumpkin chair cover type thing on the Pottery Barn website as well, but it’s gone now too.  There is one there that looks more like it’s made of burlap.

Here’s the version I made for him:

I know, again, different from the original (much more rectangular) but I like it.  Baby S waddled up to it and petted it, then babbled something and smiled, so I will take that as a sign of approval.  Oddly enough, it seems like he knows it’s his too, even though he still sits in the high chair.  Even though he won’t sit in this chair until next year I wanted to go ahead and make both at the same time.

I managed to make them both for a grand total of $4.05 (including sales tax).  Here’s the break down of supplies and cost:

If you like the idea of making a chair cover but don’t want to do all the embroidering then I think you could make this even simpler by just using fabric and hot glue. 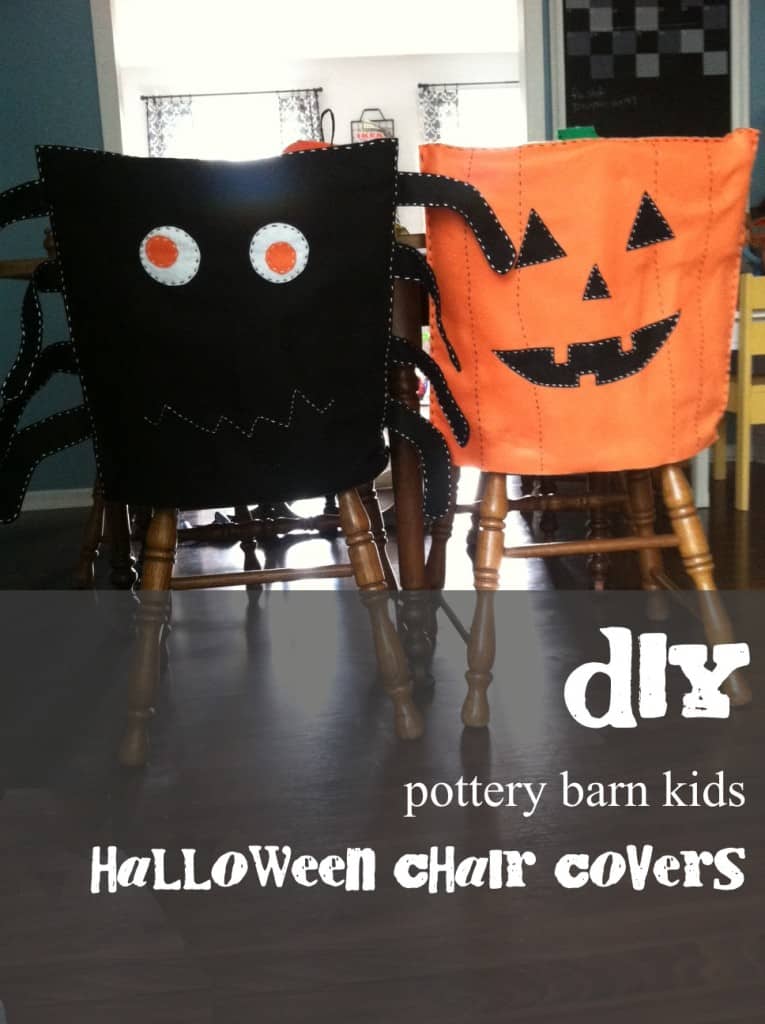 WOW! That's so awesome you made those yourself! They are festive and comfy and they look great for way less money! great job momma! Thanks for joining our link up!

These are adorable. You did a fantastic job

These are AH-mazing! I love my some Pottery Barn too, but my gosh those prices are terrible. I love that you made them yourself! I definitely like crafts but I'm not sure I would know where to begin ha. So this post semi-backfired and now I just want the pb ones.. =) Thanks so much for linking up today!!

Thank you! I think you could totally make one of these :)

Oh my gosh, these are adorable! Great job!! I too love Pottery Barn, they have the most darling things, but their prices! Yikes! I love how you were able to make these for so much less and put your own spin on them!

Thank you so much!

These are too cute!