So as you may have noticed, I’ve been gone a while.  First, there was the stay-cation and then the vacation.  For the vacation I loaded up our sons (3 1/2 years and 11 months) in the car and headed to visit my parents in Virginia, leaving my husband behind since he had to work.  Generally this road trip takes about 8 1/2 hours in the car, but it took me 10 1/2 to get there and 12 1/2 to get home.  Yup.   I have many things to say about this whole experience, so hopefully I can get them out in a clear manner.

I elected to drive because flying is expensive, flying with two kids with car seats and all their stuff is crazy, and I just thought I could do it.  Well, I did do it.  I did make it there and back driving all by myself.  And did I mention that I don’t love to drive?  Not even a little.  But I lived to tell the tale, so let’s start at the beginning, shall we?

I took a quick selfie in the car just before we prayed and headed on our way.  I wanted to have a picture so that I’d be able to see how much more of my hair had turned gray by the time we got home.  The trip was uneventful the first few hours.  My goal was to stop every 2 hours or so, and we did just about that.  About 2 1/2 hours in we hit construction on the Pennsylvania Turnpike.  This did not cause a traffic problem, but it caused a major panic problem for me.  Why?

Jersey walls.  I cannot explain why, but when they put those walls right next to my lane of traffic I just feel my blood pressure shoot up and I start having nearly a panic attack.  Logically I try to tell myself just to keep driving, that I’m not going to hit the walls but I just can’t seem to calm myself down.  And they went on for miles!  Miles!  After one really rough stretch I pulled off to a rest stop and had to take a break from driving because it was just too much.  After the construction was over the rest of the trip went more smoothly.

The next day however I went out to my car to go meet up with a friend and I found a flat tire. 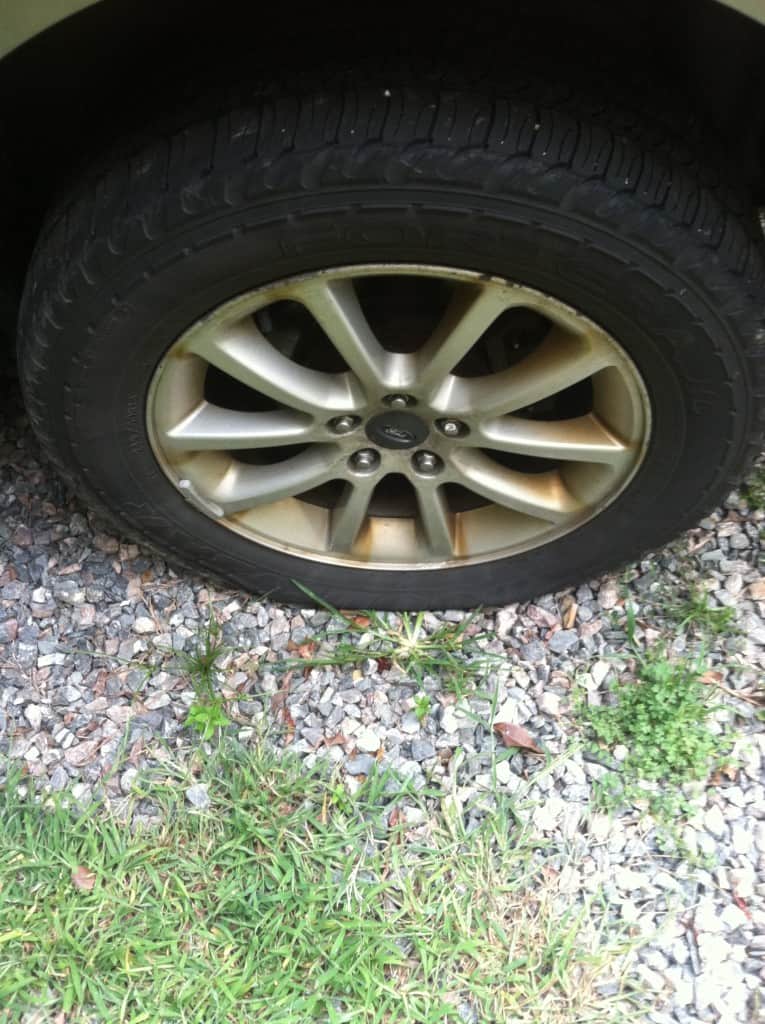 Thankfully my dad took care of that for me and I didn’t have to deal with it.  We had a great visit with all of my family and made some very special memories for my boys.  Even after being there for two weeks A did not want to leave.  He told me that we should pick up our house and move it closer to Memaw’s.

And after the trip home, I couldn’t agree more.  So we left about 7:00 or so in the morning.  First we were just behind an accident on the highway.  Thankfully it seemed minor, they moved the cars pretty quickly and we were only stopped about 30 minutes.  Then A started to tell me that he didn’t feel good.  An hour into our trip he threw up.  So I exited the highway in the middle of nowhere and pulled over into a cul-de-sac.  It was really private and wooded so I pulled him out of the car, changed his clothes, cleaned up his seat as best I could, and gave him a few cuddles.  We were about 20 minutes from the University of Virginia, where I had planned to stop and so we kept going until we got there.

Once in Charlottesville I got the boys out of the car and we walked around a little, getting some fresh air.  I was trying to see if A was truly sick and going to throw up again, or if he had just gotten car sick.  And since I’ve only been back to UVA once since graduation I was really keen to walk around.  A seemed to be feeling just fine so we wandered around the Lawn and peeked into a few gardens. 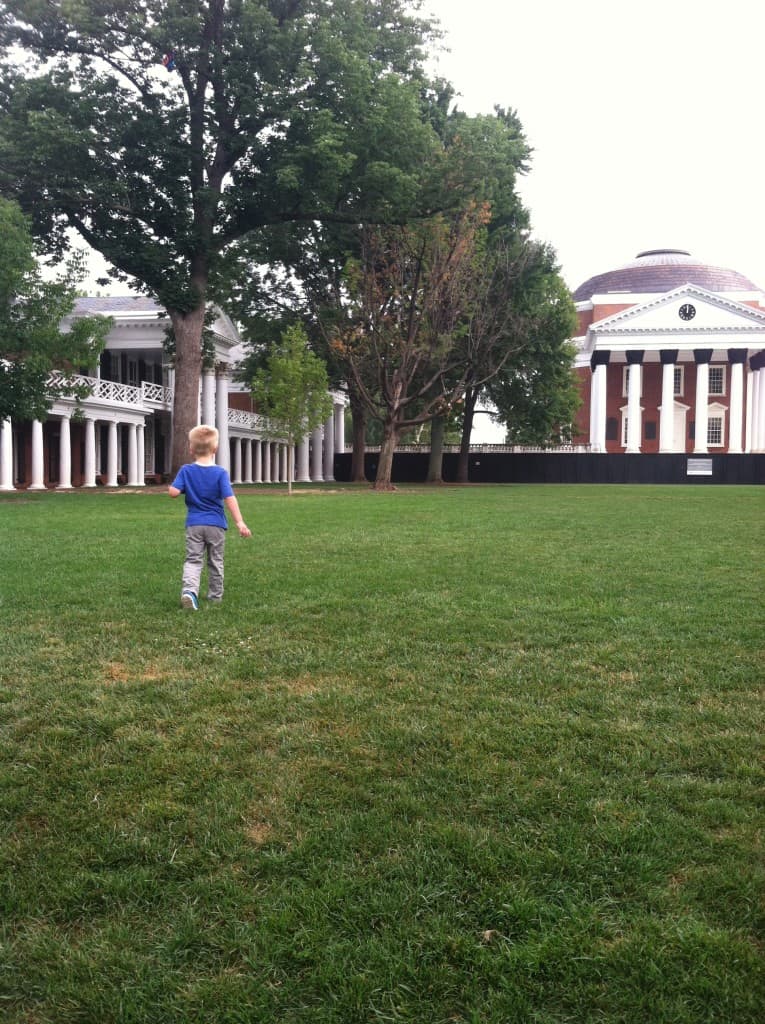 It still feels like home.  I did not want to leave, but after about an hour and a half I decided it was time to get back on the road.  So here’s where I explain to you the route I took home.  Take a look at this map:

So the red route is the normal route that you’d take from Charlottesville to Akron.  But remember, I didn’t have fun on the Pennsylvania Turnpike on the way there so I decided to take what is called “The Southern Route” home.  That would be the yellow path.  In order to get my GPS to reroute me to the Southern Route home I changed my preference to “Avoid Tolls”.  Well, I thought that would cause her to take me on the Southern Route, but she (we call our GPS Gypsy, and she’s a girl to us) decided to take me on the blue route pictured above, which I am now naming The Crazy National Park Mountain-Top Route.  At first we were on just tame country roads, but then we headed up the mountain in the George Washington National Park and we were in the mountains for hours.  I have no pictures of these crazy, winding roads but trust me, they were insane.  And it lasted for hours.  There was a short break in some tiny town and then we headed through the Monongahela National Forest and we were in the mountains again.  FOR HOURS!

Eventually we made it out of the mountains and were back on the more tame country roads.  The kids did pretty well in the mountains, and thankfully no one was crying or needed to to the bathroom so I would just focus on not careening off the side of the mountains.  We also got to see a lot of deer.  And not much else.  We ate lunch at about 2:30 because that’s when we finally found a fast food place.  The kids did get to eat some snacks in the car and I did pull over at an old abandoned gas station to feed the baby a bottle at one point, but we made it. 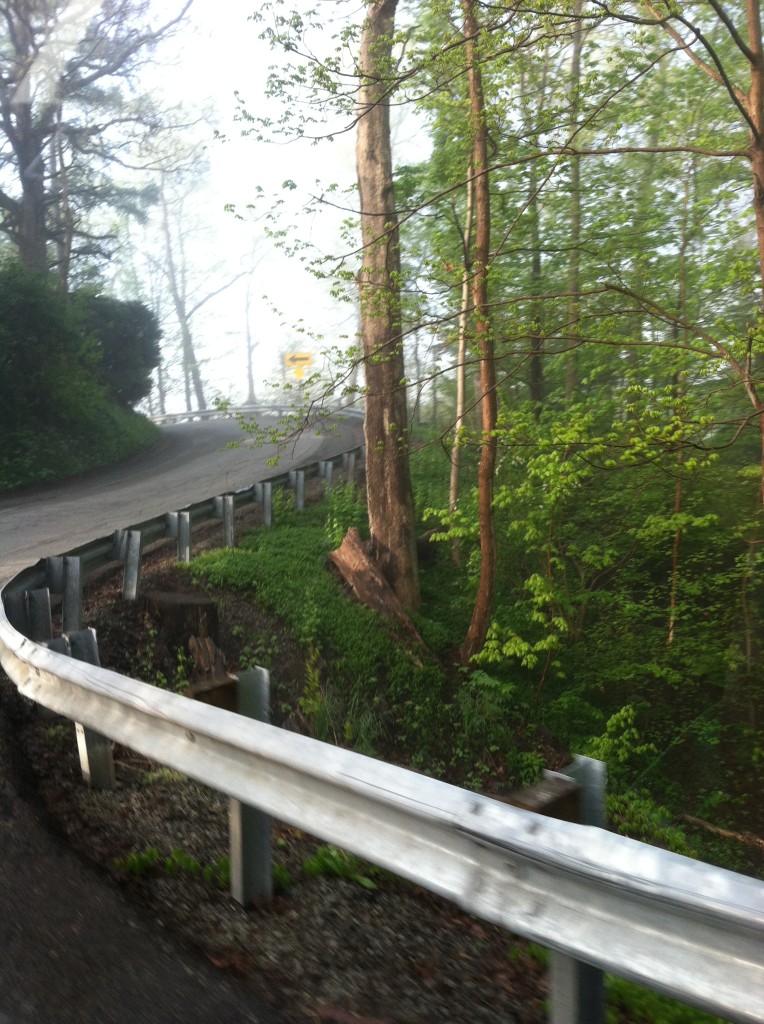 Please note- I did NOT take this while driving. I actually took this on another trip when my husband was driving, but this is the sort of road that I was dealing with!

Earlier in the day I had not decided if we would stop overnight at a hotel or go the entire way home, but weary from concentrating on all the mountainous roads, getting up at 5 AM (Thank you, baby S), and trying to keep 2 kids happy, I decided that I wanted to get home to my helping husband and my warm bed.  We finished out the trip and made it home.  My husband put the kids to bed and we just crashed.  I’m thankful that we were able to make this trip and my parents made some wonderful memories with the boys, but it was and exhausting trip both ways and so I’m thoroughly loving being home.  There really is no place like it!

Anyone else making a long trip alone with the kiddos?  I’ll be back some time this week to share some tips for keeping the kids entertained in the car on long trips.

What a trip! Whew! We live about 45 minutes from cville and go there frequently! Ha-we've driven on that blue scenic route through Highland Co Va and it's very curvy!

I would go to Charlottesville all the time if too if we lived so close!

Wow! What an adventure! Glad you made it back in one piece! :-)

Thanks, it was an adventure!