Back in May Courtney Joseph from Women Living Well spoke at my Moms Group and since then I’ve enjoyed reading her blog.  Now she’s working on reading through the Bible in 3 years and has invited other women to join her in this Good Morning Girls Study.  I’ve decided to join along and will be blogging along with others.  Each Friday I’ll share what God has taught me through the week.  If you’d like to join along too, here’s the schedule.

This week we took a look at chapters 1-6 of Esther.  Here’s a little bit about what God has been impressing on my heart as I studied Esther this week:

Esther.  When I think of Esther, I picture her as a weird-looking scallion/leek thanks to my most recent exposure to her story, via my little kids. 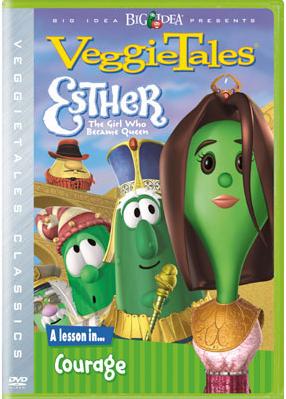 But pushing that image aside, I see the true Esther as this amazingly beautiful and brave young woman.  When I was reading through her story I was most struck by chapters 4 and 5.  In chapters 1-3 we see the set-up for the story to unfold.  King Xerxes attempts to show off, Vashti defies him, he gets rid of her and makes Esther his new queen.  Meanwhile, Haman gets angry at Mordecai, Esther’s cousin and plots to take out all the Jews as a means of revenge.  Then in chapter 4 Mordecai sends a message to Esther, urging her to beg for mercy on behalf of her people (Esther 4:8).  I find her response to his request interesting.  It’s interesting because we’ve seen her listen to him before, trust in his guidance, and do as he says.  Back in chapter 2, verse 10 we learn that she conceals her family background because Mordecai had instructed her to do so.  Mordecai raised her ever since her parents died and she trusted his wise advice in the past.

But this time, she responds differently.  Instead of saying “Sure, I’ll go straight to the king”, she reminds him that approaching the king without being summoned could cost her her life.  He in turn lets her know the harsh reality of the situation in verses 13-14.  Her position is no guarantee of safety.  And if she remains silent, “deliverance for the Jews will arise from another place…” (v 13).  Basically, God doesn’t need her to save them.  Mordecai believes that God will deliver them with or without Esther… but this doesn’t mean that she should remain silent.  She has come to a royal position “for such a time as this” (v 14).

It’s that weird thing about God’s will, isn’t it?  God doesn’t really need us, but he does use us to accomplish His will.

We see that Esther takes his counsel to heart and she gets her plan together in verses 15-17.  I can just picture the determined look in her eye as she says “…And if I perish, I perish.”  Even though it’s not her initial reaction, she summons the courage to do what God has placed her there to do.  She makes known her reliance on him by fasting and praying and reaching out to the community to do so for her and with her.  Physically she would go in alone to the king, but her mighty God and an army of her people would be with her spiritually.

The banquet she holds for the king in chapter 5 is a success and that night God works in the king’s heart to set up Mordecai for honor and Haman for defeat.  I’m not gonna lie, I kinda enjoy the literary justice in chapter 6.  Haman thinks that he’s designing his own honor, but in the end he has to be the one to lavish it on Mordecai.  As we end chapter 6, Haman is being hurried away to the second banquet that Esther has prepared.

If you want to see how the story ends please read along with us!  Tomorrow’s reading is Esther Chapter 7.  We’re doing one chapter a day.  This is the month’s reading plan:

I’ll be back next week to share my thought’s on the week’s readings.  In the meantime, think about your own life… is God calling you to be brave like Esther?  Know that even when you have to take a stand alone or face great personal risk that you’re never truly alone.  God is always by your side, and through the beauty of community others can be there with you through prayer and fasting as well.  Let me know if there’s anything that you’d like prayer for and have a wonderful weekend!

Isn't Esther such a wonderful story of redemption! I love it and there are so many practical applications to be made for us now!

It is a great story!

I picture the Veggie Tales characters too! The king is so old in that version, but when we read the story from the bible I picture him as young and handsome. I'm probably wrong! ha

I think the line you quoted from Mordecai about help arising from somewhere else was my favorite out of all the readings. I just love how his unwavering faith. It amazes me! It really shows a huge difference in how he views the world from most of us I think (or at least me!). Instead of thinking, "Esther, you have to-you are our only chance" he is saying, "Here is an opportunity for you to glorify God, take it or leave it, but he will use someone else if you don't step up". I even told my husband if we ever have a fourth baby and it's a boy, I want the middle name to be Mordecai :)

Thank you so much for sharing your thoughts on the study so far. My kids LOVE the Veggie Tales version of this story! It was literally the first thing that came to my mind when we started reading this.

You're welcome! My kids like the veggie version too, though initially we had to put it away for a while because my older son was scared of the hooded figure from the Perpetual Land of Tickling.