Say that 5 times fast.  Oh, this project.  This project was one that originated during the great purge.  I took a look at some of my crafting supplies and decided it was time to “use it or lose it”.  I have had these wooden slices sitting around for about 2 years.  They are slices of branches from a sycamore tree that we had taken down.  I used some to make coasters for Christmas gifts back in 2014 but I had some leftovers hanging around.

So I decided to make a wreath with them.  The door has been naked since I took down the Christmas wreath and the old Spring wreath doesn’t really work now that the door is white.

To make the wreath I first laid the wood slices out on a piece of cardboard.  Initially I thought I would make a round one but for some reason the rectangular one was more appealing.  Once I decided on a configuration I traced around the slices.

Then I cut out my “wreath form”.  Let me just say here that this wreath may not be the sturdiest or last super long but I wanted to make it for $0 and with things I needed to use up hence my compromise of structural integrity.  If you want to make one of these maybe use something a bit beefier to make yours.

I tried to cut my cardboard so that you could (mostly) not see it behind the wood slices.  Then I hot glued the slices onto it.

Next I attempted to reinforce the cardboard backing a little by gluing jumbo popsicle sticks to it.  I know, I know.  If this were the story of the three little pigs I’d definitely not be the bricks pig.  But again, I was using what I had on hand and determined not to spend money.  And we all know next year I’ll probably get the urge to make a new wreath anyway.

Once I had done all this I thought I’d attach a ribbon to it and call it a day.  But it was so blah.  I mean, I love wood and all but with the white door it was just so plain.  And with it being winter I am longing for some color so I decided at this point to paint the wood slices.

I went with green because it feels fresh.  Each slice got painted with a slightly different shade of green.

Then I went back over each one and added some brush strokes in a slightly different shade of green.

After doing this I went over each one with a very watery wash of green to blend things in a bit.

I then coated it with clear coat, attached a piece of jute twine to hang it with, and called it a day.

This really was a project where I wasn’t sure where it was going and even wondered at one point if it was going in the trash, but I like the end results.  It feels fun and fresh and so far I am enjoying it.

What’s on your door right now? 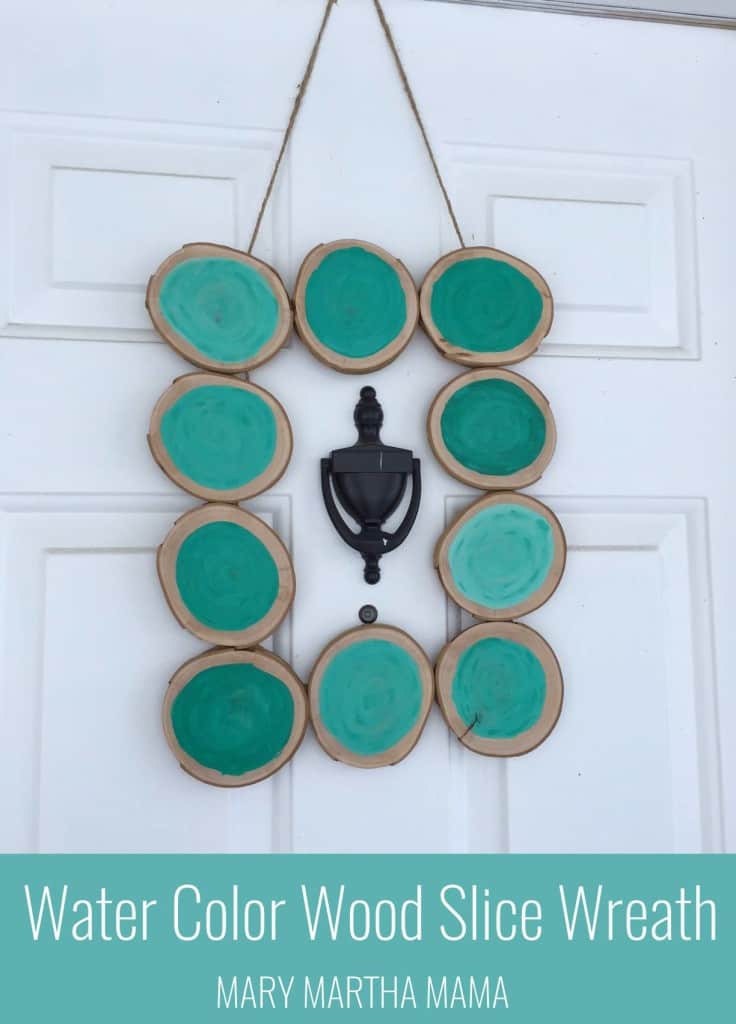 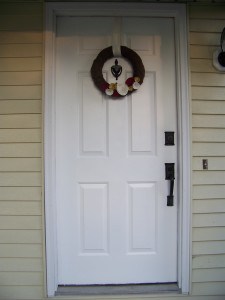 Want more wreaths?  Check these out: 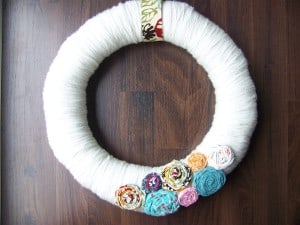 This is such a neat idea!

Thank you so much!

Your wreath is so cute. Simple to make, too. You could have used more cardboard in a rectangle to reinforce your wreath form. I will have to do it, because my fdoor gets slammed alot. I'll drop it a couple of times, too. The good thing is the way the the wreath is designed, I can make one myself! No calling my sister to beg for a wreath! Thank you so much. Now to get my brother to cut some wood for me or buy at Joann ' s. Thank you so much for the great idea.

Sharon, thanks! You can totally buy wood slices if you can't get some cut. My door doesn't get slammed as we never use it for coming in, we always use the side door :)